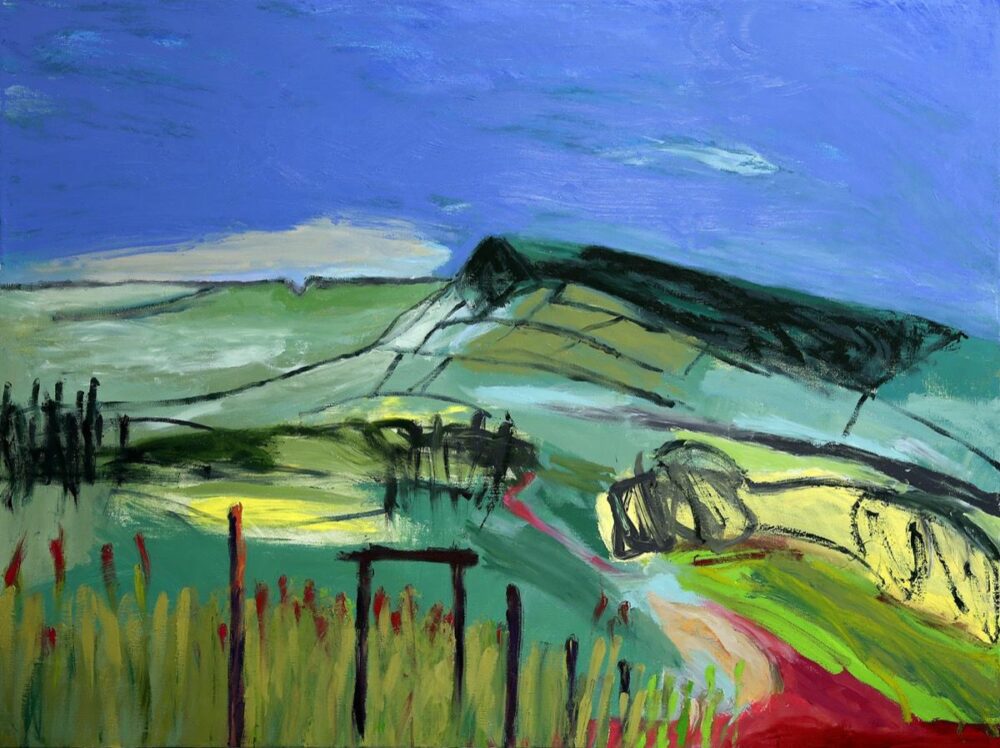 '"If it had ended up just me and painting, I think I'd be dead by now." Lucy Jones says this in a matter-of-fact tone, without a shred of drama, while guiding me around an exhibition of large-scale paintings that are as raw, direct, original, and arresting as any that have been made in the UK this century.

Half of the exhibition at Kings Place, London, entitled Looking Out, Looking In, is about "me and painting": introspective and brutally frank self-portraits where simplified compositions - the full-length figure placed boldly against flat abstract grounds - confront conventions of self-presentation, identity, femininity and ageing. In "Wheelie", a sculpturally posed walking frame echoes the posture of the artist, standing squat, determined but clumsy as an oversized toddler, resplendent in psychedelically striped jumper and dungarees. There is a saggy, close-up, unflattering nude wearing only glasses in "Being 50", and a cramped figure with lopsided face, greying hair, big eyes, ungainly hands, flaring energy, in "Who is the artist round here". Meeting Jones, you see that this is not a distortion: it is an accurate self-depiction.

The other half of the paintings, expressive landscapes in shrill chromatic contrasts, look outwards. Magenta/green/lemon rounded hills and fields in "Heatherland" represent the Marches near Jones's Shropshire home. Scribbled tendrils and jolting trees dissolve among masses of pink, orange and gold, in "Lead You Up the Garden Path". Brilliant white lamplight illuminates a watery, purple London nocturne, "The Park". Exuberant and joyful, these are also edgy and, restless, as off-balance as the self-portraits. "People tend to like either the landscapes or the portraits," Jones says. "And people who like the one don't understand why I do the other, but for me the two go absolutely hand-in-hand."

Jones, 59, is a painter of substance and solidity. After the progressive King Alfred's School in Hampstead, she trained at Byam Shaw, Camberwell and the Royal College, won the Prix de Rome in 1982, and launched her career in 1987 with an exhibition at Flowers Gallery from which three incandescent riverscapes, including the flamboyant yellow/grey "Winter South Bank", reminiscent of Derain's treatment of the Thames, were purchased by the Metropolitan Museum in New York.

At this time, Jones was "so desperately depressed"; leaving art school had been lonely and difficult, "no one gives a damn if you live or die, paint or don't paint, no one wants to see your work." Then she met her husband; they travelled to New York, to see "the fantastic Jackson Pollocks and incredible impressionists", as well as her own work hanging in an exhibition of British artists at the Met. "Everyone else in that show was very dour and serious and I just thought, actually you can be a painter, you know - beauty is not a word to be sneered at, although my work isn't obviously beautiful. It's about awkward beauty."

Jones belongs to a lost generation of British painters, born in the 1950s, coming of age in the 1980s, who achieved early success, but were then eclipsed by the celebrity of the YBAs, conceptualists a decade their junior. Painting, and beauty too, fell off the museum map, yet the many artists of this vintage - landscapist Christopher Bramham, abstractionist Hughie O'Donoghue, still-life painter Emily Patrick - have worked steadily, building up weighty bodies of work benefiting, in individuality and concentration, from being out of the limelight.

For Jones, isolation was compounded by disability: born with cerebral palsy, she walks and talks with difficulty, and is severely dyslexic. It is impossible not to interpret the vertiginous, tilting perspectives of her landscapes as the vision of someone for whom physical and psychological equilibrium are hard-won, while the self-portraits narrate her relationship both with her own image and with other people's projections about disability. Many are sprawled with graffiti-like slogans, such as "Fallen" or, enclosed in a pair of red lips, "Am I sorry", written back to front "because I want people to have difficulty reading the work - like I do."

For decades, she did not allow critics to mention her disability, "because it limits what people see. I call the paintings of myself self-portraits but it's not that I'm totally egotistical, I'm talking about the wider world. I look at slightly quirky things and the hidden things that we all have to deal with. I had not liked looking at myself in the mirror. I felt sexless (unlike Frida Kahlo) . . . [Now] depression is far less prominent. I met my husband and my confidence grew. I began to paint the whole of me and paint the awkwardness of how I look - which is both personal and common to all. There's a disconnect - between all human beings - which I try to convey." In "It's A Long Way to the Bottom of this Canvas", for example, the focal point is an upright walking-stick suspended on a blue-violet ground; at the top is Jones's body, horizontal, upside-down, out of reach of its vital prop: in free fall, or controlling the painting?

Her humorous titles "defuse the emotional impact of the work. They are tongue-in-cheek, suggesting something slightly ambiguous - although I paint very directly. I'm not ironic. I want to nail it. All this irony and slipping around, I can't bear it. It bores me, it's tedious. The art curators have taken over the world!"

I ask about artistic influence. "Eclectic," she answers, then: "I'm panicking in my brain because I don't remember the names of the artists. I've looked at a lot of work but my dyslexia is very extensive, it affected my life far more than the physical disability, and I don't remember specific images, they're kind of inside me. I think what happens is that I re­invent the real every time I'm painting, so I'm not actually copying what I did yesterday. I'm looking at things anew each time, although I go back to the same spot."

Every day, she drives in search of the motif, crawls on the ground for three hours at a time "in a spot where I can get to", makes sketches; thus the sense in her paintings of being inside a landscape, of being enveloped by it. Seascapes, such as the tumbling cliff and gorse above a lone sailing boat in "See the Sea", painted in Pembrokeshire where her London-based family have had a home since her childhood, have a particular airiness - "sailing is the most amazing experience, you don't have to walk!"

I wonder whether she is saved from the glib irony of much 21st-century art partly because painting for her is too physically hard, too intensely wrought from experience, to be turned into a joke. If this is the case, disability is the cost of a rare, authentic expressiveness, connecting Jones to early 20th-century modernists such as Ernst Ludwig Kirchner.

"Without the spark of anger which feeds my energy, nothing would happen," she admitted years ago. Now she says, "I'll have a word with God when I get up there. I think he's got a right nerve. In one way I've had a completely charmed life, it's been extraordinary, being able to just about sustain painting. I couldn't go to university; if I hadn't been a painter, I would have been nothing. I couldn't stand being nothing. I would have ended up in a really bad place. Life is awkward, [being disabled] is a bit like being a black person in a totally white society. I wouldn't like to press the point too much, but where do I fit in this world? When I see my work among other people's, I want to die! I think, oh my God, that doesn't look like anyone else. When I had driving lessons, the instructor said you're just average, and I almost kissed him - I thought, for once, I'm average!"'