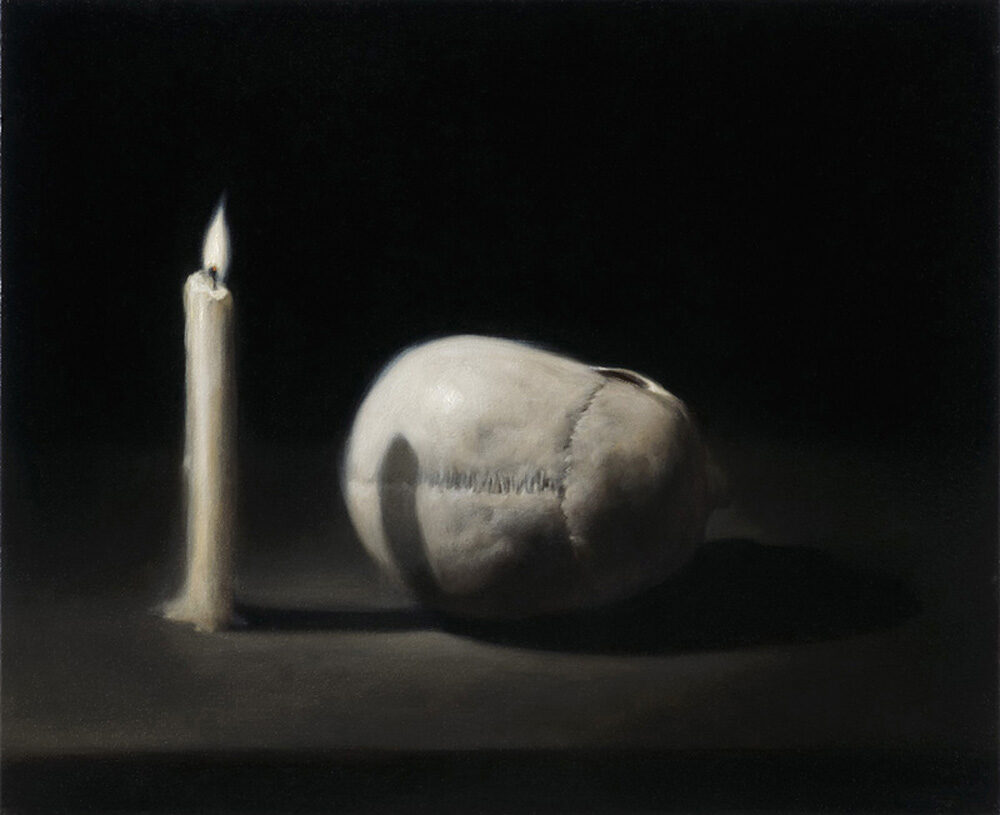 The human figure, heads - and recently animals - have always been the central concern of Ken Currie's work. However, certain works are defined by an absence of the figure. Here, shrouds, monuments, architectural spaces and ordinary objects take centre stage. Despite this persistent underlying drive to 'depopulate', Currie has not, until now, consciously explored the concept of still life painting.
Currie explains that, on regular visits to the Burrell Collection in Glasgow, he is drawn to a small, modest, quiet painting by the 18th century French painter, and master of the still life, Jean-Baptiste-Sim̩on Chardin. It depicts an arrangement of rather humble everyday objects on a dusty shelf. Painted exquisitely, the simple composition is charged with mystery and an almost spiritual intensity. Looking at this work, the viewer is struck by the sense that still life painting is capable of conveying a weight of subtle meanings and allusions.

Toward the end of 2008 Currie began work on his first still life series with a small painting called 'Black Coffee'. His motivation to paint a quotidian subject, rendered on a modest scale, arrived out of the pervasive over-saturation of news stories reporting greed and stupidity on a colossal scale. He felt the need to disengage, retreat. And once he started, "all sorts of possibilities began to emerge".
These paintings are of objects found largely around the artist's studio or in his home; everyday objects which hold a certain significance for him. They do not assert themselves as overwhelmingly symbolic; they are simply familiar things that form the punctuation marks of his day to day existence. By painting them, by visually seizing them in a certain way, Currie hopes to capture something further - something akin to the taciturn weight of allusion deftly distilled by Chardin.

Some of the objects he set up in a still life context - on a table, side-lit with a dark background - to see what kind of feelings the would generate when removed from their everyday usage. Some were painted entirely from the imagination. The cast that reappears in a number of paintings is the life-mask of the eminent oncologist Sir David Lane, which Currie had used in painting 'Three Oncologists', a work now hanging in the Scottish National Portrait Gallery. Some of the objects refer to memory, to notions of frugality, economy and a stripping away to basics - themes and motifs from the artist's childhood. The paintings are more than just observational studies of things placed on a table in a random choreography. They are not about observing and analysing the forms as such; they are about the aura and resonance of these objects and the memories and associations they evoke. It is interesting to note how bringing certain, seemingly prosaic, objects together results in their becoming imbued with a heavy symbolism. Other items, conversely, seem to carry an innately ominous quality that calls for no interlocutor other than the viewer.

A realisation came to Currie, towards the end of his work on this series, that his paintings - unlike Chardin's - were mostly of single objects; two or three at the most. This acknowledgement provoked him to set up the large 'Still Life', which involved taking many of the objects he had looked at previously and entering them into in a kind of conversation. What is interesting about this painting is the range of interpretations it suggests. It seems to carry a fertile cache of possible meanings that are at once available and operative and yet completely elusive. In this painting, enigma pierces through the staid domestic visual language to point towards something 'other'. This embodied subtext, an intimation of something beyond the object - spiritual, psychological or otherwise - is the absent presence at the heart of Currie's covert sign system.